The class will be based on the book, Nullification, How to Resist Federal Tyranny in the 21st Century, by Dr. Thomas E. Woods, Jr. 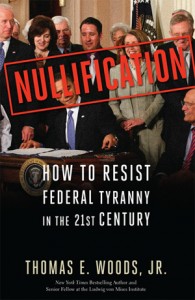 Citizens across the country are fed up with the politicians inWashington telling us how to live our lives—and then sticking us with the bill. But what can we do? Actually, we can just say “no.” As New York Times bestselling author Thomas E. Woods, Jr., explains, “nullification” allows states to reject unconstitutional federal laws. For many tea partiers nationwide, nullification is rapidly becoming the only way to stop an over-reaching government drunk on power. From privacy to national healthcare, Woods shows how this growing and popular movement is sweeping across America and empowering states to take action against Obama’s socialist policies and big-government agenda.
Thomas E. Woods, Jr., is a senior fellow of the Ludwig von Mises Institute and host of The Tom Woods Show, which broadcasts every weekday. He holds a bachelor’s degree in history from Harvard and his master’s, M.Phil., and Ph.D. fromColumbiaUniversity. Woods has appeared on CNBC, MSNBC, FOX News Channel, FOX Business Network, C-SPAN, and Bloomberg Television, among other outlets, and has been a guest on hundreds of radio programs, including National Public Radio, the Dennis Miller Show, the Michael Reagan Show, the Dennis Prager Show, and the Michael Medved Show. He is a regular fill-in host on The Peter Schiff Show.
CHECK OUT THIS VIDEO!
Nullification: How to Resist Federal Tyranny in the 21st Century
The class will be facilitated by Randy Siler.  For more information, contact Nancy Murdoch, CCTA Education Chairman at 252-665-2679.

REAL AMERICA: Dan talks to a parent pushing back against school indoctrination (5/13/21)

Rep. Stefanik selected as No. 3 House Republican after ouster of Rep. Cheney

In an overwhelming show of support, New York congresswoman Elise Stefanik has been selected as the House Republican Conference chair to replace Wyoming congresswoman Liz Cheney. The decision came Friday… [...]