Common Core Update for Concerned Parents, Teachers, and other Taxpayers

About 150 people heard Lindalyn Kakadelis, Director of Education with the John Locke Foundation, speak about Common Core standards and related matters as they affect kindergarteners through 12th graders, their parents, teachers, and the outlook for education in Craven County and beyond Tuesday evening January 21st in the historic Stanly Hall Ballroom in New Bern at the Coastal Carolina Taxpayers Association’s monthly public meeting.

During the Q & A period, several parents and educators shared stories about their children and students that brought tears to the eyes of some of the attendees. One spoke of a third grader who has previously been an excellent student who loved school who became so intimidated by the frequent testing and the way they are handled that she began to resist going to school, didn’t sleep well, and developed “illnesses” that would prevent her from going to school. That story broke the ice, and one after another shared short stories of young children suffering real distress as a result of going to school. Most of it was associated with testing practices in grades K-3. Mrs. Kakadelis was very sympathetic and referred to parts of Common Core as a “train wreck.” Private schools, versions of home schooling and “cottage” schools were suggested as possible solutions for young children in public schools who are exhibiting signs of real distress. One of the school teachers confided that she had put her child in private school.

Mrs. Kakadelis pointed out that, although Common Core is copyrighted and therefore supposedly cannot be changed, it does have a provision that allows up to 15% additional content. This has heretofore been thought to be insignificant because it’s hard enough to teach those items that will be tested. One of the recurring complaints from teachers was that recurrent, frequent testing eats into instruction time badly. However, Mrs. Kakadelis says there may be some light at the end of the tunnel. She has seen an online video of a Florida legislative session (or hearing) in which the head of Florida public schools says that a letter has been received from the Association of Chief State School Officers (one of the trade associations holding the Common Core copyright) saying that they can make changes in the standards. This occurred within the last week. Florida is now considering making some 40 changes to standards to be used in Florida.

Mrs. Kakadelis suggested that may mean North Carolina has two possible solutions to the problems presented by Common Core. The first, of course, would be to just back out of Common Core altogether as some states have done, develop our own standards, and use one of the national tests that work well (such as the Iowa test) administered once a year to determine how North Carolina students are doing relative to students in other states. The second option might be to change the standards like Florida appears to be headed toward doing and by that method essentially develop a North Carolina version.

Michael Speciale, Representative in the North Carolina House and member of the joint General Assembly Common Core Study Committee was in the audience, and requested an opportunity to enter the conversation. His request was granted quickly. Rep. Speciale spoke directly to the parents and teachers (many of whom are also parents) who had shared such heartfelt stories about young students, and invited them to share their stories in writing with him. He said he wants to share them will all members of the legislative Common Core Committee, and added that if they would prefer it, he will redact anything that identifies them personally. He wants every member of the committee to hear the things he had just heard. 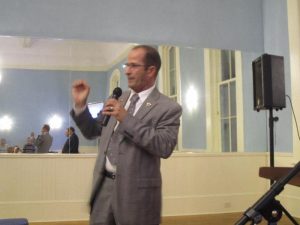 When the presentation ended and the meeting was adjourned, animated conversations broke out all over the room.

An attractive young, black teacher was heard to say that, as awful as the excessive testing was for young children, that wasn’t the end of the story. She said she had taught in public schools for 17 years, but this year she’s teaching in a private school. She said the reason for it is also connected to the testing. She said imagine dealing with the student who had the “melt down” and wouldn’t even try to take the test and knowing all the while that your future salary is going to be affected by results of her and other students taking that and other tests. It just got to be too much.

One of the points Mrs. Kakadelis had made during her talk was that the tests currently being used to test students against Common Core standards in North Carolina were developed by the North Carolina Department of Public Instruction so some of our current problems are coming from within. She said there is effectively a testing company within the Department of Public Instruction (DPI). Perhaps we’d be better off if the “testing development company” part of DPI were eliminated. Overuse of tests appear to be causing more problems than they’re solving.

REAL AMERICA: Dan talks to a parent pushing back against school indoctrination (5/13/21)

Rep. Stefanik selected as No. 3 House Republican after ouster of Rep. Cheney

In an overwhelming show of support, New York congresswoman Elise Stefanik has been selected as the House Republican Conference chair to replace Wyoming congresswoman Liz Cheney. The decision came Friday… [...]