Now, Kay Hagan, Harry Reid and his SuperPAC and liberal politicians running for the state legislature are lying about education spending.

Here is a small excerpt for you readers-on-the-go:

“Perdue, last week, ordered teachers and other state employees to take 10 hours of time off in return for pay cuts in May and June needed to balance the state budget.”

so that they could balance the state budget!!!

So here’s the truth about education spending. The chart below shows the total amount spent on each K-12 education budget starting in 2008 through 2014. These figures come from the state budget which is available online: 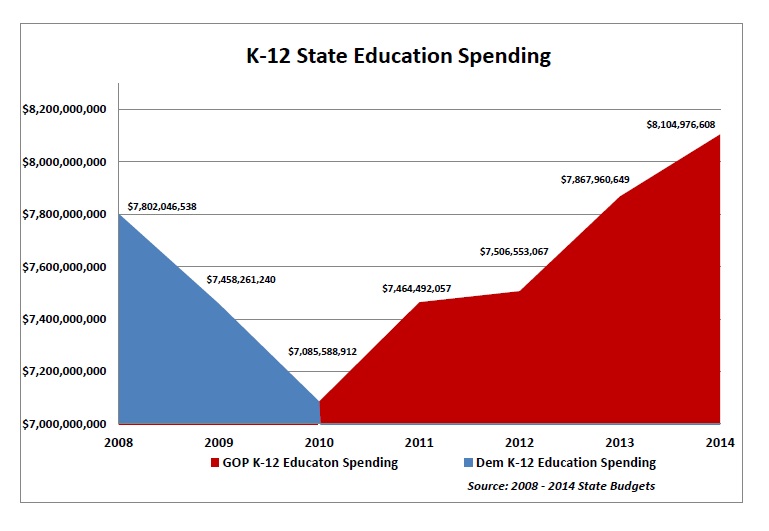 You can clearly see how liberal politicians cut education, furloughed our teachers and fired them because they put politics over priorities.

Not to mention they froze teacher pay.

You can also see how Republicans have re-prioritized K-12 spending and increased that investment over $1 billion dollars – despite inheriting a $2.5 billion structural deficit from Gov. Bev Perdue, the highest taxes in the South and one of the highest unemployment rates in the nation.

So why are they lying? Because the truth is not on their side.

Please share this email with your family, friends and neighbors. Help us get the truth out!!

General Michael Flynn recently stopped by the Honky Tonk Saloon in South Carolina for a “Bikers for Trump” event, where he presented the Patriot Award to Sam Mustafa, the owner… [...]

Former congressman Lou Barletta recently launched a political action committee called Change Pennsylvania, which is aimed at rebuilding the state's infrastructure and economy amid a slew of damaging policies and… [...]

Around 2,000 rockets have been fired from the Gaza Strip toward Israeli cities since Monday. The escalating fighting between Israel and Palestinian militants in Gaza marks the region’s worst violence… [...]

Questions are arising in Arizona about the role of the Maricopa County sheriff in handling election routers. [...]